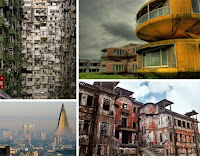 Thanks to my wife for pointing me to Web Urbanist, and their list of Abandonments. Most relevant to this site? The abandoned cities of Asia.
Posted by Tom at 3:19 PM 1 comment:

Reports of the Death of Korean Cinema...

...have been greatly exaggerated. It's a sad fact that there is at least as much, if not more, writing about the business side of cinema as there is about the artistic side. And for a decade or so, Korean cinema has been one of the biggest business successes in the world. All of this ended after the record-setting year of 2006 proved to be unsustainable and the industry went into a steep decline in 2007.

This led the usual prognosticators to declare the Korean Wave over and go looking for the next big thing. Too bad for them. The industry did take a hit in 2007, some producers certainly lost their shirts, but the talent is still there, and the result, at least based on the evidence presented at Toronto and Pusan this year, is that the industry seems to have shrunk to a more manageable size, meaning fewer swing-for-the-fences blockbusters, and - from what I was able to see - a clearer focus on making quality movies.

Only three Korean features were selected for Toronto this year, and all three were excellent choices. Kim Ji-woon's The Good, the Bad, the Weird proved that Korea can still make the best big, fun movies around. Noh Young-seok did just about everything, including designing the sets and composing the music, for his droll feature debut Daytime Drinking. And In Between Days director So Young Kim's sad, sweet, autobiographical Treeless Mountain even got the business types in a tizzy - the line for the industry screening I saw was at least twice he capacity of the tiny screening room where it was shown.

If the small number of Korean films in Toronto seemed to confirm the conventional wisdom about Korean cinema's decline, Pusan offered a refreshing counterargument. There were more than 300 films in the festival this year, but over and over it was the Korean ones that came up in conversation as particularly impressive.

Top among my favorites were Hong Sang-soo's latest portrait of male ineptitude, the Paris-set Night and Day; Sohn Young Sung's Borges-inspired labyrinth of stories The Pit and the Pendulum; and the rambunctious comedy-of-obsession Crush and Blush, a film that seemed to split viewer into love-it-or-hate-it camps, a generally good sign for its director, Kyungmi Lee, one of a number of talented women directors who seem to be popping up lately. Of the films I wasn't able to see, Ikjune Yang's Breathless and Seung-bin Baek's Members of the Funeral came up repeated in conversation as impressive.

The Korean Retrospective program, which this year focused on Han Hyung-mo and included his awesome 1961 crowd-pleaser My Sister is a Hussy, is always eye-opening. In addition to Han's films, I was glad to see two restorations of film by my favorite madman, Kim Ki-young, on the program. I had already seen his classic psychodrama The Housemaid, which was shown in a newly-restored print, but I was glad that his overheated 1981 period drama Ban Geum-ryun was also on the bill.

So let's hope that the fall festival season is a harbinger of a newly lean Korean film industry which may not rake in the dough like it used to, but can still produce quality stuff.
Posted by Tom at 6:56 PM No comments: