A while ago my lady and I sat down to watch The Chaser, a Korean film that was generating a lot of buzz at the time. A few minute in, a serial killer, after imprisoning a prostitute in a filthy bathroom/torture chamber, sets about trying to bash her head in with a hammer. Thinking we were in for another serial killer flick trading on the brutalization of women, we turned it off.

Well, I tried watching it again recently, and, as surprising as this may sound, I’m glad I did, because it turns out that The Chaser is a textbook example of popular Korean cinema’s way of confounding expectations by tweaking well-worn conventions into something new and thrilling. 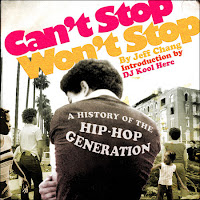 The Hip Hop Kung Fu Connection events we did at the Freer a couple of weeks ago inspired me to dig a little deeper into hip hop history, so I picked up a copy of Jeff Chang’s Can’t Stop Won’t Stop: A History of the Hip Hop Generation. Chang’s subject is not just the music, but the social and political contexts from which it sprang. This may sound dry, but the result is a compelling, even angry book that recounts in impressive detail hip hop’s rise from underground Bronx party music to global cultural, economic and political force.