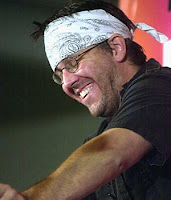 Like a lot of people, I was shocked to hear of David Foster Wallace's suicide yesterday. It would be trite to call him the voice of my generation, but I think he was one of the few (if not the only?) writer able to voice, and also pierce, the carapace of irony many of us armed ourselves with while growing up in a media-saturated world of composed mostly of advertising images.

One of his great strengths was his ability to pick apart not only the mediated world we live in, but his (our) attitudes towards it, in a self-designed, necessarily wordy style that struck a balance between the self-consciously literary and slacker-slang.

And beneath it all, always a kind of sadness. I mean, Infinite Jest is an infinitely sad book.

You can get a sense of him from this essay he wrote about a radio talk show host, in which he not only explains the machinery of talk radio and its curious mix of bile and faux populism, but find some form of affection for his subject.

But David, I must tell you that it's hard not to be furious with those who take their own lives. I'd like to think I can't imagine the pain you were in, but if I can imagine it, then you have no excuse. Especially since one of your more widely-circulated recent efforts was an inspiring commencement address about overcoming life's difficulties. Also, hanging yourself is a pretty fucked up thing to to, especially w/r/t* your wife, who had to come home and find you. What can I say, except that I am sorry you had to end it this way.