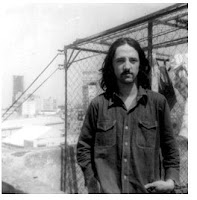 I've been meaning to post about Roberto Bolaño for some time now, because I am addicted to/envious of his copious output and lean, laserlike prose. Now, thanks to Jonathan Lethem's New York Times Book Review piece on the eagerly-anticipated publication of the English translation of his mammoth final novel 2666, we know why. Lethem writes:

"In a burst of invention now legendary in contemporary Spanish-language literature, and rapidly becoming so internationally, Bolaño in the last decade of his life, writing with the urgency of poverty and his failing health, constructed a remarkable body of stories and novels out of precisely such doubts: that literature, which he revered the way a penitent loves (and yet rails against) an elusive God, could meaning­fully articulate the low truths he knew as rebel, exile, addict; that life, in all its gruesome splendor, could ever locate the literature it so desperately craves in order to feel itself known."

Is it too romantic a notion to think that Bolaño's awareness of his impending death gave him the mental focus to produce such an astonishing ouevre in such a short period of time?
Posted by Tom at 10:58 AM