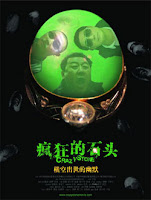 I'm fully aware that Slate's bread and butter is, along with explaining things, a peculiar brand of tepid, middle-brow contrarianism. I sometimes think their writer's guidelines consist entirely of: "Pick a thing, then disagree with it a little bit." So when someone pointed me to this article by Grady Hendrix about Chinese cinema, my first reaction was along the lines of "meh." But the more I thought about it the more its biases bugged me, so here we go.

I should state at the outset that I personally like Grady, who is a quick-witted and funny guy, but I'm starting to think that he drank a little too much of the Variety Kool-Aid when he was on their payroll, which is clear from the very first sentence of his Slate piece: "The traditional path for Chinese directors was to make art films in China, get acclaimed at overseas festivals, be banned once or twice at home, and then be permitted to become art-house darlings in America."

This is the jaded Variety position in a nutshell: Serious art films are a bogus racket, just like Hollywood, but at least Hollywood is honest about its base motives. For many a Variety critic(except for the ones who actually like movies), the idea that someone would make art for art's sake is laughable. All anyone wants to do is make money. Hendrix's second sentence clinches it: "If they were good boys, they might even get a Hollywood deal." He then goes on to lump Zhang Yimou, Chen Kaige, Lou Ye, and Jia Zhangke - four filmmakers whose work and relationships with the authorities in China are far more complex and disparate than he lets on - into his category of Hollywood aspirants, before claiming that the blockbusters that actual Chinese audiences enjoy are "better" than than the art house films that succeed overseas.

I'm not going to go into much more detail. The whole article reads like the editorial philosophies of Variety and Slate had a very ugly baby together, and it's clear that Hendrix is more interested in raising hackles than in accuracy or intellectual honesty. Which is fine. And some of the movies he mentions to bolster his thesis do deserve a wider audience, although he does himself no favors by praising Feng Xiaogang's Cell Phone: just because a movie stirs up controversy doesn't mean it's any good.

I suppose the best way to refute his argument is by analogy. Imagine a writer in another country denigrating the work of our more adventurous independent filmmakers because real Americans are into "better" movies like Tranformers 2. (Speaking of which, check out this hilarious review from Peter Bradshaw of the Guardian. Now that's how you take a director down!)
Posted by Tom at 5:16 PM