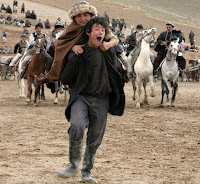 A boy missing parts of both legs hires a developmentally disabled older boy to carry him around like a horse. The actors playing the characters are nonprofessionals who actually suffer from the maladies we see on screen. The legless boy turns out to be such a sadist that by the end of the film he has his "horse" trussed up in a saddle and bridle, with a bit between his teeth and horseshoes nailed to his feet, and is renting him out to the local kids so they can ride him around for kicks.

Is this the latest provocation from Lars von Trier or Harmony Korine? No, it's Samira Makhmalbaf's Two-Legged Horse. When I showed this film in our theater a couple of weeks ago, something I had never seen before occurred: during one particularly disturbing scene, at least a half dozen people jumped out of their seats and bolted for the door. Most Iranian films using child actors in allegorical stories do it to couch serious messages in gentle packages. Makhmalbaf violates this rule. The cruelties in Two-Legged Horse are multiplied by the fact that they are being performed by and on children.

Von Trier and Korine always remind me of the creepy kid from sixth grade who used to cut caterpillars in half to watch the two pieces slowly writhe to death. The cruelty and freakishness come from a position of comfort - of those with every advantage seeing how far they can go. I always detect a schoolboy chuckle behind the scenes. Makhmalbaf's cruelty arises from conviction and engagement with the conditions she sees around her. In an interview on the Makhmalbaf family web site, Samira talks about how her father Mohsen Makhmalbaf stayed up all night writing the script out of rage at the political climate in Iran, and that she, shocked by its cruelty, agonized over it for days before deciding, “maybe I came to cinema to make this film.”

She describes the film in terms a kind of reverse-Darwinism: the devolution from man to animal. (She also references Freud, Marcuse and Nabokov.) Her fierce intellectualism and commitment to cinema may sound quaint today - a faint echo of the Godardian 60's - but her commitment extends beyond words. She made the film in Afghanistan, where a hand grenade lobbed at the set killed one crew member and injured five others.

It certainly has divided audiences and critics. In the online film journal Offscreen, Gilda Boffa describes the walkouts, catcalls, and contentious q&a session at its world premiere during the Toronto International Film Festival. J. Robert Parks praises it as a "compelling allegory of our contemporary world," but Robert Koehler, in a scathing review in Variety, accuses Makhmalbaf of crossing the line "between dramatizing physical abuse and causing genuine physical harm to actors." (Someone should let her know that, for a mere $400,000, Variety will gladly make a negative review go away.)

The complicated co-dependent relationships that can develop between the powerful and the powerless, torturer and victim, have been well-studied (I'm surprised she didn't quote Foucault as well, but he may be hard to get hold of in Iran). Two-Legged Horse adds nothing new to the discussion, but rather expresses what we already know, in the microcosm of the two boys' increasingly sadomasochistic relationship. One follows the plot not to find out what's going to happen, but to see how far Makhmalbaf is willing to take the debasement of her characters. I found myself shuddering to think what she would do with unlimited creative freedom and a larger budget. Distant observers like me may wonder why she went to such lengths to reconfirm cruel truths that we already know all too well, but I suspect that, for her, those truths are close enough to home - and real enough - to justify the effort and sacrifice that went into it.
Posted by Tom at 11:10 AM

Making money on the internet is easy in the underground world of [URL=http://www.www.blackhatmoneymaker.com]blackhat community[/URL], You are far from alone if you don't know what blackhat is. Blackhat marketing uses not-so-popular or misunderstood ways to produce an income online.

Just want to say what a great blog you got here!
I've been around for quite a lot of time, but finally decided to show my appreciation of your work!

Thumbs up, and keep it going!

United States Restaurant Guide - a guide to every restaurant, http://restaurants-us.com/ut/Salt%20Lake%20City/Domino%27s%20Pizza/84106/

I have faith to overcome their barbarism least 4 should be solid food, preferably protein-rich and moderate in Team Nigeria won the third Bronze Medal too and for the first time Team Nigeria had two medals in an Olympics game. represents the believer standing on Holy Ground.