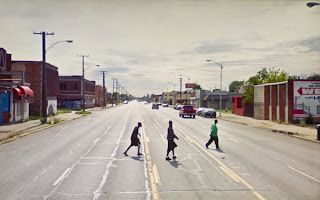 I've written about Geoff Dyer before. Since then, my ambivalence about him has only grown. In his New York Times Book Review column, for instance, he often seems to be reaching for appropriately quirky subjects. But this article in The Guardian about Google Street View Art is equal parts fascinating and disturbing, for reasons he's probably not even aware of.


Dyer rightly points out that the attraction of these images is their uncanniness, their contextlessness. We don't know where they came from or exactly what is going on in them. But he also acknowledges that they are a form of armchair art. Their makers, and by extension, their audience, is removed from the human experience contained in them.

But in a discussion of the most disturbing set of photos in the article, Dyer eventually goes even further than the artists he discusses in turning the photos' subjects into abstractions. In discussing Doug Rickard's images of what he dubs "the economically ravaged fringes of cities," he rhapsodizes about "wastelands" inhabited by "forlorn figures [who] look like they will never quite make it to the opposite kerb."


But all I see in these images is a new way to aestheticise the poor. Those kids crossing the street aren't abstractions, and I'm pretty sure they'll make it across. They could end up as Trayvon Martin or they could end up teaching at a university, but turning them into blurred symbols for the fall of Capitalism is just another way of refusing to acknowledge the actual humanity of the poor (and it must be pointed out: black) people depicted. Worst of all, Rickard didn't even have to drive through these "wastelands" to get his images. He only had to search the Web.
Posted by Tom at 5:02 PM

Have you ever tried your hand playing video games? If not, then you've entered into the online game world with this article! There are tons of games and anyone can find something they like. In order to help you out, the following article will feature some information on the best games of each gaming genre.

If you are thinking about buying some new games, join a community forum where gamers share reviews of their favorite games. Such forums can provide great information. You will find straight forward reviews that can help you determine whether or not to purchase a product. They write reviews that are honest and can be trusted.

Try to limit gaming to no more than a few hours per day maximum. There is no doubt that gaming is addictive, and this has become a real problem for many people. Try to stick to playing online games for only a few hours each day. If you're someone who plays long hours, then it's best to take plenty of breaks during the day.

Try brightening the screen on your gaming system. Dark games are eerie, but they're also hard to play. Colors tend to blend together in the dark, and you can have a hard time spotting your enemies. Increase the brightness if you do not mind sacrificing a little ambiance. Brightness will allow you to see clearly.

There are several websites that you can visit to determine if a game meets certain requirements for the computer. After you download it, it will say whether you have the necessary requirements for that specific game. If you don't like downloading things, bear in mind that you could just get the information and then delete the download.

Research and understand the rating system used for computer games. Some games are not meant for children, so consider this fact when shopping for games. Each game will have a specific rating ranging from Early Childhood (EC) to Adults Only (AO). Be sure to choose an appropriately-rated game, especially if it is a gift designed for someone else.

The industry is going forward and gamers are too. Gamers want a huge selection, super-fast access and great prices. If you see a game you want, but don't like the price tag, just wait patiently for a bit. As time passes, the price of the games will decrease so the manufacturer will still be able to record high sales volume.

The Nintendo Wii system is a useful tool to help you get into shape. There are a large number of fitness games available for the Wii system.

The cost of a game is an important part of your purchase decision. Just because a game is expensive, doesn't necessarily mean it's the best one for you. Read game descriptions carefully to help you make a solid game buying decision. In addition, you should check out online reviews. Avoid buying something when you have doubts or not completely sure about it.

All games have ratings thanks to the ESRB. Games are appropriate for ages 3 and older if they receive an EC or Early Childhood rating. If your children are six and older, a rating of E is appropriate. A rating of E+10 is for people older than 10 years old. If your game is rated T, it is suggested that you be 13 or older to play it. "M" (mature) rated games are for people who are at least 17 years old. AO indicates the game is just for adults and RP signifies "Rating Pending."

Figure out how to operate the safety and parental controls of any gaming system that comes into your home. You can likely make adjustments that keep kids from viewing mature content. Some allow each gaming profile to be customized separately, allowing adults to enjoy games not meant for younger audiences.

You will find playing online games to be quite fascinating and enjoyable. These games can increase your speed, increase your brainpower, or simply help you escape stress for a while. Take you game higher with the great advice in the article above.