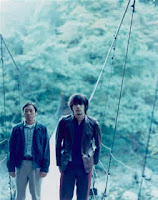 The list of criminally-neglected foreign films is a long one indeed, but one I really want to beat the drum for is Miwa Nishikawa's Sway. According to Nishikawa, it was inspired by a nightmare, and even though there is nothing supernatural about it, that atmosphere of nightmare-dread we've all felt saturates every frame. It's a remarkable feat of sustained mood.

I included it in a program of recent Japanese films last year, and it provoked the most interesting audience reactions in the lobby after the screening. What I, and others, found so powerful and haunting about it is that it's a movie essentially about ambiguity - the impossibility of truly knowing what motivates even those closest to you (to reveal any more would give away too much of a plot that depends on a key not so much plot twist as swerve early on that has the effect of knocking you off balance for the rest of the film.)

Even more fascinating to me were the reactions of the people who disliked it precisely because of its ambuguity. Some of them even seemed angry - they wanted answers that Nishikawa explicitly resists giving. Which makes me think that Nishikawa is a poet in an age that only wants information.

You can read David Wilentz's interview with her at The Brooklyn Rail, and buy the DVD at Amazon.
Posted by Tom at 9:25 AM

nice blog
your film is not new