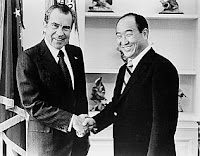 Although I will never watch a TV show with the words "Real" and "Housewives" in the title, Dahlia Lithwick's review of the new season made an interesting point about one of the most pervasive and annoying facets of life in DC.

Lithwick finds this season especially depressing because apparently the usual trappings of Real Housewife-hood are not enough for this batch. She writes: "The real currency in Washington isn't money but 'proximity to power,'....the D.C. Housewives crave something they will likely never even come near: power."

They are the embodiment of this strange desire I've noticed here of not so much wanting to be powerful oneself, as to be next to it. This phenomenon was expertly skewered by the Coen Brothers in Burn After Reading, which includes a great scene with a minor character nattering on about how he finally got to attend the Kennedy Center Awards. It rears its boring head at parties when you find yourself buttonholed by someone who can't wait to tell you about the time they went to a party and stood in the same room as Ronald Reagan, in the sycophantic culture of the workplace, and most offensively in those hideous pictures people plaster their walls with of themselves shaking hands with politicians, which should be considered a crime against aesthetics.

(Seriously, people plaster their living rooms with pictures like the one on the left, only they'll be shaking hands with people much less famous than Nixon. I often wonder if they hang them in ranking order from most famous to least, so they always have to move them around when they get a new one.)

(And even more seriously, they're ugly. No one wants to go to someone's house and look at dozens of pictures of them grinning and shaking hands with people. For the decency's sake, put up a painting or something.)

It even showed up at a charity dinner I once attended, at which the host was proud to acknowledge from the dais the highest-ranking government official in attendance. Never mind that he was something along the lines of the Twelfth Assistant Undersecretary of Agriculture. At least we knew who would be running the country if a bomb went off and all that was left of society were the people in that hotel ballroom.

I can understand the desire to have power. Presumably the people who attain it do so through some combination of talent, ambition, hard work, strategy and luck. But for the life of me I can't figure out why one would go to such great lengths to stand next to Rahm Emanuel or John Boehner at a party. What, in the end, does it get you?

I suppose it's simply the local manifestation of the larger movement in our culture embodied by the never-ending trend of "reality television:" the desire to be famous for being famous, without having to work for it. It's just that here, it seems especially pointless, and - worst of all - dull.
Posted by Tom at 10:14 AM