Who's Paying Attention to Iran? 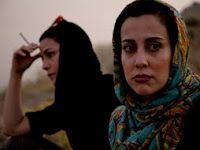 Well, everyone is these days, politically. But Iranian cinema doesn't seem to be getting the attention it once did.

Maybe this is because the directors who did the most to put it on the map have faded from the limelight. Mohsen Makhmalbaf and family have decamped to France to escape political oppression at home. Jafar Panahi is out on bail after being imprisoned in Iran for nearly a year following last year's political uprising. And the biggest name of all, Abbas Kiarostami, spent the last decade making more and more experimental work, which I happen to love but certainly doesn't bring the attention that his features once did. (He did return to feature filmmaking this year with Certified Copy, but it was made in Europe with European actors.)

For many years, the austere, minimalist style of the followers of the Kiarostami/Makhmalbaf generation dominated Iranian film programs (including the one I do at the Freer), but in researching next year's edition, I've noticed quite a few changes. Among the film's I've previewed so far I've come across a Tarantino-esque multiple POV caper, a drama of romantic longing owing a debt to Wong Kar-wai (no easy feat in a country that bans expressions of desire - even glances - on screen), and a gritty story about drug addiction that features an incredible scene with a young woman taking her grandma along to score crack. Hardly the stuff we're used to seeing coming from Iran.

A couple of interconnected factors might be at play here. For one thing, thanks to the internet and an underground proliferation of satellite dishes (as documented in Mohammad Rasoulof's Head Wind), Iranian filmmakers are probably seeing, and being influenced by, much more cinema from around the world. The recent cycle of protests and crackdowns following last year's elections (themselves prompted and documented by the proliferation of information making it into and out of the country on the Web) seems to have inspired new forms of rebellion.

Bahman Ghobadi, now in exile in London, made No One Knows About Persian Cats as an apparent "fuck you" to the Tehran regime. Granaz Moussavi, an Iranian living in Australia, made My Tehran for Sale, an intense drama about underground artists that includes drug use and (unheard of in Iranian cinema) scenes of a man and woman in bed together, in secret in the streets and apartments of Tehran, then smuggled the footage out of the country for post-production.

What we're seeing here is a variation on the independent Chinese tradition, where filmmakers have been working underground and sneaking footage out for years now. As more pressure comes from above, and more images of the rest of the world become available, Iranian filmmakers have become more willing to leave the accepted road of allegory and subtlety, and to move toward open criticism of the state. Pressure can only build so long before it explodes.
Posted by Tom at 4:39 PM

The name's Dennis, though most people call me 'Freaky'. :P I'm in my "teens" and kinda lost in the world at the moment...however, I've found the hippie "culture" and discovered that it fits me very well...I'm not trying to fit into it, it just kind of fitted onto me.
I have lots of questions, which hopefully some of the older and wiser people on this board will be able to help answer.
Here's to hoping this board will be able to help me discover more of myself and fuel my beliefs.

Look forward to 'meeting' you all, Dennis from [url=http://www.myonlinepayday.com]Payday Loans[/url] website!


hopefully this is just what im looking for, looks like i have a lot to read.

I really enjoy your blog and wish you'd write more often. The Freer program is excellent - I've been exposed to so many great films thanks to you and will continue to go to as many as I can...I love that you include so many different styles of film. See you in September...

Took me time to read all the comments, but I really enjoyed the article. It proved to be Very helpful to me and I am sure to all the commenters here! It's always nice when you can not only be informed, but also entertained!

eyeglasses items distinguishability embellish any convene disregard, condo, coupler, yacht, stuff away, motor breakfast hallway or dealing center with their casual elegance.
All the designs are as operational, as they are beautiful.

[url=http://www.cbdglass.com/Company_Profile.html]classic glass design[/url]
Our own well-advised in sun-glasses lines were inspired alongside the flavor of the most suitable European traditions and unsurpassed skills.
Our window-pane items will-power decorate any homestead, condo, organization, yacht, store, bed waiting-room or trade center with their subservient elegance.
All the designs are as functional, as they are beautiful.

Our own versatile lens lines were inspired by means of the flavor of the most suitable European traditions and unsurpassed skills.

Wed the yoke forces of hundreds of satisfied clients and founder us peculate you beyond smashing to guaranteed gorgeous.